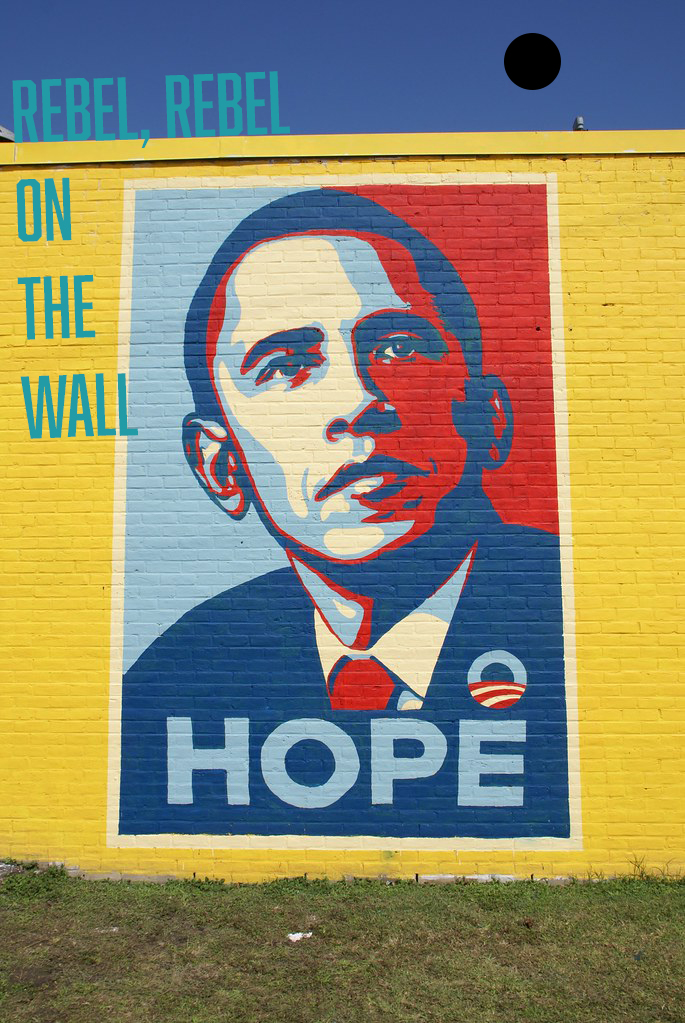 Rebel, Rebel on the Wall

The simple difference between graffiti and a mural is that graffiti is illegal.

Graffiti is a political act. It claims someone else’s property as your space to make art. In a society where we deeply value private property rights, graffiti thus becomes a big problem for our justice system.

In the 1990’s, which saw the rise of tagging and graffiti as a part of street culture in black communities, the broken windows theory became popular with governments, especially in New York City. According to Wikipedia, it states that, “visible signs of crime, anti-social behavior, and civil disorder create an urban environment that encourages further crime and disorder… [and] policing methods that target minor crimes such as vandalism, public drinking, and fare evasion help to create an atmosphere of order and lawfulness.”

We have black men and women attempting to reclaim both private and public space as their own in one of the only ways that they can. And we have white people attempting to stop that. This story goes back much further than the 1990’s.

The wealth that created America as we know it was created by exploiting black slaves for hundreds of years. Although slavery ended in some ways with the American Civil War, it continued through sharecropping and lives on with the exploitation of black prisoners.

It is through the unpaid labour of enslaved peoples that the United States went from a small agricultural economy to an economic powerhouse on the global stage. Becoming a superpower simply does not happen without violence and exploitation. (Further reading: Ta-Nehisi Coates and Matthew Desmond).

The property that is being “defaced” by graffiti was built using stolen wealth, using stolen labour, on land stolen from Indigenous people. Which begs the question, is graffiti the true problem at hand?

Making graffiti is a bit like tattooing. It is not always about the design; it is about claiming your body as yours. Your body is your property, and you can do what you want with it. You can adorn it or deface it and it is nobody can stop you. Tattooing serves the purpose of claiming what is yours. And graffiti can play a similar role.

I am not encouraging graffiti, but I believe that it deserves to be viewed as an important part of how Black people have attempted to make space for themselves historically.

One example is how Black people made space for the first Black President of the United States through a version of graffiti. The viral HOPE poster which spread like wildfire from coast to coast was instrumental in growing Barack Obama’s campaign. It was turned into stickers and murals and t-shirts and placed far and wide, legal or not. In this way it claimed public spaces everywhere for his movement. Even when he was not there, his hopeful gaze was overseeing daily life everywhere. It was saying, this is ours too.

As graffiti becomes rebranded as street art and is accepted into contemporary art, let us as designers not forget its illicit roots. What does making space for black people and our visual culture look like today? How can we take from graffiti culture, which is illegal, and merge its rebel nature into a legal design? As always, feel free to email me your thoughts.